Open to ages 7-12; Two week camp
July 5-16, 2022, Monday-Friday from 9AM-3PM
Performances Friday, July 15 at 7PM; Saturday, July 16 at 12PM; Saturday, July 16 at 3PM; Saturday, July 16 at 7PM; (There will be two casts, each cast will have two performances)
Camp and performances at the Kodak Center Studio Theatre
Director: Courtney Larkin
Vocal Director: Rebecca Kemp
Choreographer: Lizzi Lou
Tuition: $350
Join Alex the Lion, Marty the Zebra, Melman the Giraffe, Gloria the hip hip Hippo and, of course, those hilarious, plotting penguins as they bound onto your stage in the musical adventure of a lifetime.  Based on the smash DreamWorks animated motion picture, Madagascar – A Musical Adventure JR. follows all of your favorite crack-a-lackin’ friends as they escape from their home in New York’s Central Park Zoo and find themselves on an unexpected journey to the madcap world of King Julien’s Madagascar.

Alex the lion is the king of the urban jungle, the main attraction at New York's Central Park Zoo. He and his best friends have spent their whole lives in blissful captivity before an admiring public and with regular meals provided for them. Not content to leave well enough alone, Marty lets his curiosity get the better of him and makes his escape — with the help of some prodigious penguins — to explore the world!

Filled with outlandish characters, adventure galore and an upbeat score, Madagascar JR. will leave audiences with no choice but to “Move It, Move It!”

OFC’s kid camp shows are typically 60-minutes in length and include full cast musical numbers as well as opportunities to feature soloists, specialty dancers, and supporting characters. Oftentimes these are Junior (Jr.) productions which are a 60-minute version of a full Broadway show, the Jr. versions reduce verses in long songs, cut subplots or unneeded musical numbers, and make the scripts easy to read and memorize for student performers. Compared to school year OFC programs, these will be a bit larger scale than our Elementary School shows, but a bit more time efficient than our Middle School shows – to ensure all students have a fantastic experience. Auditions are held on the first day, with materials taught by the instructors; all students who register will be in the show with our “no cut” policy. Directors are ready to meet all students at their respective experience level and feature their skill sets appropriately, no matter how long they have been performing. 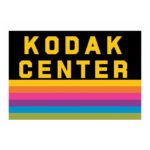 Kodak Center is a popular venue with multiple floors and studios for camp activities and rehearsals. Directly off of 104-E, the Kodak Center is convenient for our West Side campers, but is a direct drive by taking 590 to 104 from the East. Performances take place in the intimate Studio...